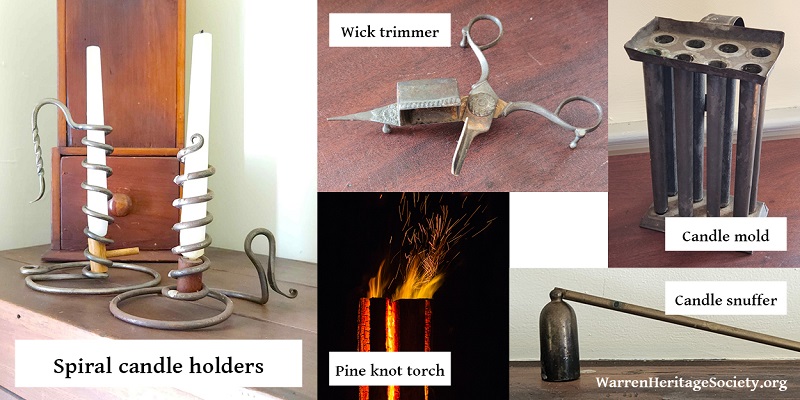 The myth. Village blacksmith to the rescue! We’ve got an “app” for that.

“We should allow our daughter to visit with that nice neighbor boy, completely unsupervised, and with no time limit” — said No Parent Ever. We don’t care how far back in time you go.

“We don’t know what to do. Could you fast-forward in time, invent computers, the internet, and smart phones with parental control apps so we can monitor our young people without having to step away from other tasks?”

“No… but what I can do is twist this piece of iron around just so, stick a cork in the base so you can raise or lower it according to your trust level, and there you have it.”

“You’re a genius, Robert. You should call it the Courting Candle holder.”

This practical and beautiful candle holder design was brought to the New World by German blacksmith immigrants (thanks, Chicago Tribune). Bees and beeswax came along with our intrepid early settlers, too!

So Colonial candles were originally softer tallow, not beeswax. Early candles were formed by dripping the wick into melted tallow until the candle formed by layers. The spiral holder also kept the candle from falling over. But candles were labor-intensive and tallow candles were smelly, and households were often lit with pine knot torches, originating with both Europeans and native Americans (thanks Revolutionary War Journal) and later, with oil lamps.

But our fretful Colonial parents were likely using the oldest tools of all — instilling a sense of personal responsibility in their young’uns and paying close attention to them.

Either way, Colonial life succeeded on the strength of human ingenuity and collaboration in a way that is hard to imagine now. And that spiral candleholder design is as eye-catching today as it was in Colonial days.

Come visit Warren Heritage Society to see more handmade tools and take a walk through history with us!